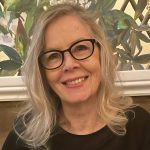 Sue Daniel is a psychodramatist (Trainer, Educator & Practitioner – TEP). She is also an individual and group psychotherapist, and consulting psychologist in private practice in South Yarra. Living in Melbourne, she also practices out of rooms in Willoughby, Sydney and online. Sue is the Director of the Psychodrama Institute of Melbourne (PIM) and Founder of both the Moreno Psychodrama Society (MPS) and the Australian and Aotearoa Board of Psychodrama (AABP).

In 2022, Sue is providing a range of services within Australia and Internationally online. A new experiential group commenced in  November 2020: ‘Onscreen’ – Explorations in virtual reality through Psychodrama. This series continues through 2022, dates to be posted. Topics include ‘psychodrama and sociometry in one-to-one therapy’, ‘role theory in couple counselling’, ‘coaching as an action method’, and ‘sociometry in the classroom’.

Sue is active in the development of psychodrama throughout the world. She teaches and lectures in Australia and overseas in communities, universities and organisations. Sue is the Board (AABP) Consultant and Senior Faculty at Psychodrama in India (PiI) and she conducts an annual residency at ‘the little Psychodrama Festival’ in Krusce, Slovenia. Her work in Japan began in 1986. She became the first foreign Visiting Professor at the Muroran Institute of Technology, Muroran University, Hokkaido, Japan.